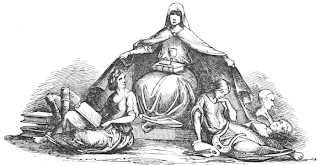 I was bad about maintaining the Mythic characters list. I totally forgot to add the barbarian Ylhooni chaos-fighters, for instance. Other NPCs (the witness, the knowledge-priestess) probably could have come off it. I rolled very few NPC Action/Positive/Negative results on the event chart, though, so luckily it wasn't much of an issue.

And speaking of NPCs, I really just need to create a page to keep track of them all so all their stats and portraits are in one place (PCs too; did you know that Udzar-sippuk has his own character sheet? You could be forgiven for thinking he doesn't). Once upon a time I had thought of making a similar page for my LotFP campaign too, but... well...

Smother is a terrifying spell. I see now why it was relegated to the Dark Forces sorcery school in the sample schools in the RQ6 rulebook. I initially took it for my PC to give her at least one thing to do in combat, and also because it's one of the classic RQIII spells for sorcerous PCs (at least in my experience). If I were going to run a campaign where the PCs were going to have more regular combat, I would definitely restrict its availability.

Combat is definitely more fiddly than RQIII, and possibly even more so than Legend. It seems somewhat less deadly, too, though that could have been a fluke of the dice. My very much not-fighter-type PCs rolled extremely well with their 20% and 29% skill levels. I think special effects are a bit too common, which slows things down in play. On the other hand, they do make writing out the narrative easier.

Skills worked exactly as I had hoped. There are enough interaction skills to carry the social aspect of the adventure without everything depending on a single Persuasion skill. The opposed skill rules are very clever, too. I felt that I probably under-used the Passions, but I role-played (as it were) the important ones anyway without needing to resort to die rolls.

Running a solitaire mystery is weird. It seemed to rely more on rolling Move Toward / Away from a Thread than any actual deduction, until at some point it became necessary to put my GM hat on and just make decisions about the whole thing. Were I to do it again, I'd opt for a smaller space to run it in (village or castle, perhaps) and come up with a cast of NPCs beforehand. And I would use the d66 NPC inter-relationship table from Star Trader to generate some basic connections between them; none of the results are Traveller-specific. I also think a mystery might work better in a more fleshed-out setting. Making up the world as you go gives you little context for the clues or the NPCs motivations.

I've been running this blog almost a year and out of 4 campaigns I've begun this is the first time I've actually finished a whole adventure. I don't count the unresolved thread, as it was separate from the main Mystery plot, and adventure number two will pick up with it as a starting point. I'd already figured out the germ of Lachaidiga's plan back around scene 17, and it became certain by scene 25.

- Now that the adventure is over, I have to finally figure out Experience rolls. At some point I decided to use them as written, both because they work for more than just skills and because it would be a pain to go back through everything I've written so see who gets a tick for which skill (Chaosium RQ style). But that does mean I have to make subjective judgements about how many to award everyone. This is why XP for treasure always seems preferable in solo games, as it provides a simple and objective solution. So then...

According to the RQ6 rulebook, "[t]he number of Experience Rolls given in any one sitting should be between two and four," but that would result in 20-40 for an adventure that took less than a fortnight of game time. I'm going to go with 6 for the whole adventure as a more reasonable figure, but also try to award them at more regular intervals during the next adventure. The rulebook also suggests "that all characters be given the same number of Experience Rolls," but the other two PC-types involved weren't there for all of it. So I will arbitrarily award Udzar-sippuk 3 experience rolls (+ modifier) for his involvement, and give Wihiyaba a single roll (no modifier) for his cameo appearance in scene 19. Udzar-sippuk also gets a free 1% increase to his Evade skill which he fumbled in the final battle; learning from one's mistakes is thus codified in the rules.

For now, I'm just going to spend Lachaidiga's experience. The other two get to spend theirs when they get their information transferred to the N/PC page I'm in the process of making.

With her experience bonus of +1, Lachaidiga gets 7 rolls in total. She hasn't time enough to learn a new professional skill or train a characteristic, nor has she been at the sorcerers' college studying a new spell. Her options are therefore increasing Passions or existing skills. She will do the latter.

Being a sorceress, the first thing she should do is raise her Invocation skill. It's currently 62. She rolls 39+16=55. Not quite good enough, so it only increases to 63%. The other six rolls, in tabular form--

So her magic skills didn't improve much, but her social and sneaking-out-of-the-house skills made a good showing. And she's learnt a bit more fighting technique -- loathe though she be to put it to the test again. But who knows what her next adventure may bring...
Posted by Alea iactanda est at 21:02