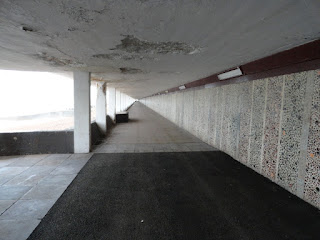 The next day the band resume their march. They pick their way through the last of the collapsing ruins, and head down to the beach, well past the dangers of the old harbour, which is haunted by horrible water mutants, or insane warbots, or something else so terrifying that fear of it has passed from scouts' reports into the oral tradition of their enclave.
It's a long trudge up the beach, past bits of wreckage and areas of treacherous erosion.

The weather is intermittently stormy, but even with the mist their destination comes into view after a few hours. The last bit of their journey is the easiest, for an old, bunker-like sea defence provides a covered walkway for the last kilometre.

But when they are nearly halfway down it, they se they are are not alone any more. A lone figure is moving towards them from the far end. The figure resolves into the shape of a young woman, obviously a mutant, as patches of metallic silver gleam brightly in her light brown skin. She wears flashy, carefully-mended clothing of Old Terra, and sports an intricate and fanciful hair style, which seems to defy gravity.

[I rolled her up on the random NPC tables in the rulebook.

When she gets closer, it becomes evident that, despite her grace and poise, she is scarcely an adult. She also appears to be unarmed. She walks serenely forward with open hands, then speaks in a voice as measured as her gait. "Hello, friends."

"Who're you?" asks Junemay, cradling her rifle in a decidedly less-than-neutral stance.

"Why are you out here all by yourself?" says Junemay.

"Want? why should I want something?"

"Where would I have run to, between this structue and the sea?"

"You might've outrun us all the same."

"I mean, why don't we discuss how we could act to each other's mutual advantage?"

Junemay looks back over her shoulder at Ewa. "Well?" she asks pointedly.

"Well, what?" responds Ewa. "Oh... sure, talking's fine. I mean, what could it hurt?" But inwardly, Ewa thinks italI can't believe she still thinks I'm psychic.

[Ewa did need to make a Mental saving throw against her paranoia. 1d20=17, so she could agree to Assia's proposition that they all talk; Danger Sense only works for immediate threats, not potential ones.]

"Good," says Junemay, then turns back to Assia. "So what do you got to offer?"

"That depends," she replies. "You're from Eastbourne, I presume?

"Then you're probably looking for your missing friends. They were exploring the pier... but never returned."

"We know where they went."

"They said that a great treasure was hidden in the building at the end. One of them -- Philbert, the ginger one with mandibles -- saw it gleaming at night, he said."

"You didn't try to help them?"

"They seemed rather intent on not lettng any of us near it. So we kept our distance, and cared for your poor Marthia, who'd been bitten by a flaysnake."

"Ugh, there's a lot of that going, round," interjects Kaz.

"Something chased them out," continues Assia, "back to the gate... but they didn't make it. Tadeu got outside and shut it, but he had lost so much blood... I'm sorry. Whatever it was didn't follow, but we chained the gate shut just to be sure."

Assia leads them up a short stair to the pier entrance on the street level. "I want some reconnaissance," says Junemay. "Ewa, Kaz, Taf, leave your packs with us and go have a look round. The rest of us will set up camp." 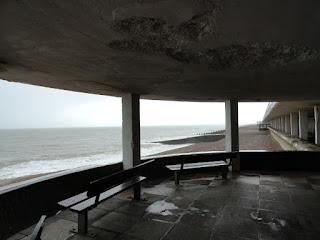 Assia's camp is in the concrete rotunda at the end of the sea defence, right beside the pier. She suggests to Junemay that is is the best protection from the wind and weather, and that her companions would welcome the company of a combined camp. Junemay consents.

As they are making camp, Assia's companions return from hunting. Oggie is a null-strain human. He wears the skins of a variety of mutant creatures, and a hotchpotch of old terran shreds and plant textiles beneath. Marguerite is Assia's older sister. They both sport the same metallic patter of mutation, and there is a strong family resemblence in their features. But where Assia's dress is vibrant and ornate, Marguerite favours earth tones and practicality.

[They were randomly generated, of course. Each had the usual 20% chance of being a mutant. When I rolled the exact same stigma as Assia's, it made sense that they'd be related.] 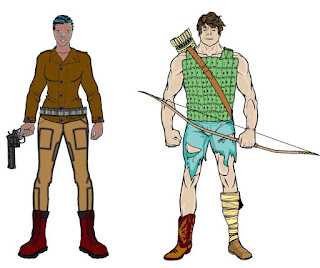 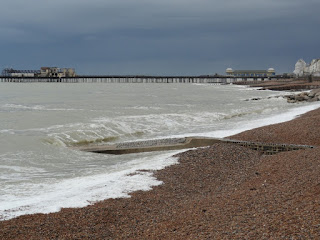 The pier is roughly 60m wide where it joins the street, and stretches about 280m out to sea. It has been ravaged by fire, and only one building stands intact upon its surface. There are many holes in the decking where the iron structure shows through [the Ruin has the Unstable Construction tag].

Ewa, Kaz, and Taf are left in front of the rusting metal gate. They scan the pier beyond in silence. Hesitant to make the first move.

"Yeah, but something's got to be there," says Taf. "Try listening." 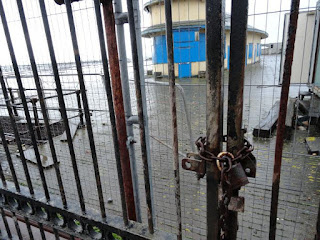 Kaz does as he is bidden. The small, metal key is on an ancient textile-based key fob, in the form of a big-headed, flaccid, pink-and-white striped, mutant feline. The key grates in the lock, but still works. Kaz nudges the gate with his foot, and it slowly gate screeches open.

"You do have the biggest gun."

Ewa proceeds very slowly through the gate, weapon at the ready. The other two follow close behind her. Ewa seems more concerned about the flooring than any surprise attacks, and moves forward at a snail's pace.

Taf is rapidly frustrated by her over-caution, and can no longer contain herself. "This is stupid!," she says. "There's nothing outside. I'm gonna check out that yellow building."

"No," says Ewa,"stay with us. We need to get a feel for the place. Everyone is supposed to have died here. But there's no bodies. No nothing...."

Taf does not answer, but trots on ahead to the intact building.

"Dammit! Come on, before she gets herself dead. I don't fancy draggin her corpse home without a boat."

Ewa and Kaz move as quickly as they dare, ever cognisant of the danger from the damp, rotten wood. Kaz is loathe to step anywhere but in Ewa's footsteps -- he is relying on her sixth sense to see them safely through.

Taf has reached the boarded-up old building before Ewa and Kaz have crossed even half the distance. She begins to circle it, and is lost from their sight.

Ewa and Kaz shuffle round the back of the building. Taf is nowhere to be seen.

"Where the hell is she?" says Kaz.

They call her name a few times, but get no answer. They make a circuit of the building, slipping several times on the damp wooden deck.

"Shit where is she?" mutters Kaz.

"Did she go inside?" asks Ewa.

"What if she fell through the deck?"

They shuffle over to the biggest hole. Ewa lies down on her stomach on the black and white chequered linoleum flooring left over from the building that once stood there. She begins to crawl gingerly up to the edge of the hole. Kaz is about to follow suit when...

... Ewa suddenly backpedals as fast as she can. "It's starting to give!"

"Shit! shit! back to camp! We'll check it out from the beach."

They rush off the pier and down to the concrete rotunda. No one saw anything fall. They all rush out into the surf to see if Taf can be found. Even their three new friends run into the waves to help look. 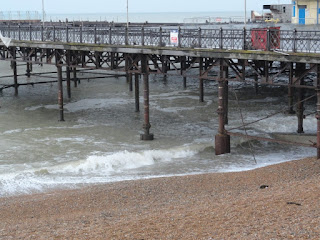 After 15 fruitless minutes, the search is abandoned. Junemay is furious, though the bulk of her ire is vented at Ewa. "How could you let her get out of your sight? I expect this sort of amateur bullshit from Kaz, but you, Ewa, I thought had at least a little bit of common sense. But instead of coming back with even the slightest bit of useful information, you go and lose on of our number. And now we're all wet. You two arseholes just pulled an extra round of firewood detail. Be dark soon. Get out of my fucking sight."

Ewa and Kaz slink away from the camp and into the ruins of the town, looking for an old building with wooden trim or frame in order to collect dry firewood.

"I guess. But, really.. haven't you ever heard of staying friends with your ex?"

[Collecting firewood in the ruins called for an encounter check, but nothing is alerted by the noise.

For the Scene Alteration, I decided to use a BOLD waylay: party - accusations, exhausting. Solution=avoidance]

At length, Ewa and Kaz stumble upon the ruins of a traditional English pub. Any liquor has long since been looted, but they are more interested in the (restored? faux?) tudor interior, and begin to pull wooden trim off the walls with their crowbars. Looters have already made off with any useful furniture.

When they get back to camp, Junemay still wants to argue [UNE:hostile - rage - skills].

"I put you in charge because I thought you were more sensible. It's not like you've never been away on a mission before. Maybe you should try acting like it. You came back with no information. Nothing! And now everyone's spooked that Taf just disappeared like that. What were you thinking? Were you, even?"

[Charisma/Persuasion roll of 9+ needed to calm her down: 6-1, failure.]

"Don't you even start with the pet names! Reminding me of the mess you made in the past isn't going to make me forget the one you've made now."

"I'm on first watch again, right? I think I'll take it up at street level this time."

And so saying, Ewa walks off alone. When Junemay finally sends someone to relieve her, she decides she'd be happier sleeping away from camp, and wraps herself in a blanket under a concrete overhang.

[There were no night encounters; I made two checks: once generally and once for Ewa on her own.] 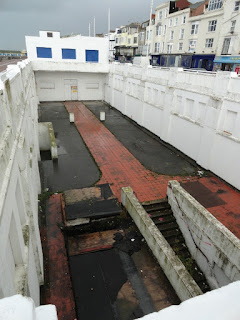