Other Dust solo - Part V : the people one meets in ruins 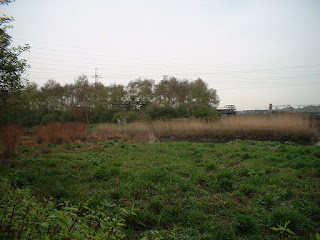 Setup: into the wastes

Ewa walks away and up through an overgrown field (once a golf course) following Kaz's route. But instead of turning left towards Eastbourne, she turns the opposite way. She follows an old motorway for a while [A259/Eastbourne road], then looks for a ruined house to camp out in overnight, as dusk is beginning to settle.

Q: What does her pursuer do next? Imitate / The physical just keeps following 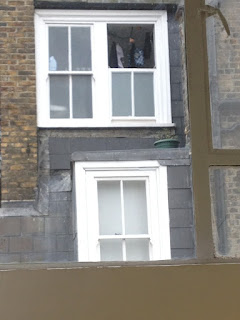 Ewa finds a small house that looks reasonably intact, and makes her camp on the top floor. She is a little worried that there may be soldiers sent to hunt her down, but reasons that she'd probably wake up if anyone came in the house. She is soon sleeping soundly.

No one does try to enter the house, though Ewa has been being watched. Her unknown pursuer is more curious than bold. They slip a dry branch through the front door handle so it can't be opened without making noise, and find a place to sleep across the street.

[but! 1d6=1, night encounter: Patch of Radioactivity -- this area is still suffering from an ancient atomic generator leak or some such, and is bathed in low-level radiation. Saving throws are required, so Ewa heals 1d6=3, 1hp (from her Radioactive Vitality mutation. The stranger fails her save, and loses 1pt of CON (reduced to 10).

The next morning, a groggy Ewa wakes up and quickly consumes some food. She wants to set out as early as possible, just in case there was someone sent to find her.

She finds front door stuck, and struggles to get it open. At last she puts her back into it, and it opens with a loud crack. At first she assumes it was just old and got stuck after being closed for the first time in decades (or longer), but then she notices that someone had barred it with a stick. [6+ Wis/Perception check: 8-1, success]

"What the hell?" thinks Ewa, as she ducks back into the house and raises her rifle.

"Hey!" cries a young woman's voice from across street. "I want to talk to you!"

Ewa peeks round the doorframe, and can see a vague silhouette in the house across the street. "Come out, then," she shouts. "We'll talk!"

"Because I see you up there and haven't aimed my rifle at you yet."

"Getting my attention before shooting makes for a pretty shite ambush, dont'cha think?"

Ewa shoulders her rifle and walks out into the street. The mystery woman emerges and meets her in the middle. She is young and bright-eyed, and clad in a colourful mix of Old Terran clothes. She also seems to have collected a fair bit of Old Terran technology.

"I'm Tansy. Sorry I had to be so roundabout getting to talk to you, but I needed to know you were out here on your own and not part of a bunch of raiders or summat. Or one of those crazies from the shore fort." [UNE: mysterious - conundrum - last action]

"So, Tansy, here we are. I'm Ewa. And I'd like to avoid those crazies from the Fortress as well. Now, what do you want?"

"And I need to get away from here."

"So do I. But I can't abandon my poor Shelley."

"Shelley's a he. I named him after an old poet in a book I found. We were sheltering in a building not too far from here. There was a collapse, and I think his leg's broke. I couldn't pull him out to check."

"He's a redhorn [mutant carnivorous bovine]. I know! but he's different than all the others. Maybe on account of I raised him from a calf, back when I was a kid and lived in a farming enclave. An' he's the sweetest, most docile thing to them as is friendly to him. And he's saved my life from the raiders who burnt down my home. No one else survived, so we just have each other these days. Well, we found a new farm what took us in, but... I can't leave him to die."

"I can't explain it. Maybe the Vicar told me too many old myths. This just sounds like a test or something legendary, like Kahuna and the Cattle Raid of Ulster. So, lead on. But if we run into any scavengers from Eastbourne, they can't see me, ok?" 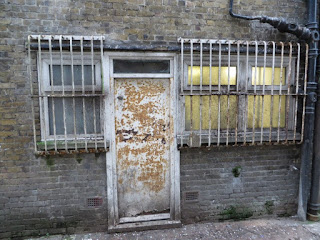 Tansy leads Ewa back towards Eastbourne proper. They turn a corner into a long, broken street filled with wrecked vehicles and less identifiable detritus, and tansy stops short. "Oh, no," she says.

Some [2d6x10=] fifty meters ahead, a small group of scavengers is picking through piles of twisted metal in the street. Ewa and tansy crouch behind some plasticrete rubble, and Ewa peers at the group through her binoculars.

She hands them to Tansy, who sees one of the scavengers talking to a soldier and pointing at a certain building. "Shelley!" she gasps.

Ewa takes aim at the soldier. "Get [1d6=] his attention, tell him he's dead if they don't all surrender right now. I've got him in my sights."

Tansy, her submachinegun in hand, strides out to do as she's bid.

"Stop!" she yells. "We have you surrounded. We mean you no harm, so please cooperate!"

[Scarlet heroes has great reaction tables for getting NPCs to agree to things. The soldier counts as an Unfriendly NPC.
2d6=3, Anger/Violence]

The soldier says nothing, but raises his combat rifle to fire...

...but Ewa's shot drops him before his gun is quite level with the ground.

"No one move!" screams Tansy. "I don't want to hurt any of you. Just put your hands up and we can talk about this like reasonable people. Please!"

Ewa is hurriedly reloading her rifle. "Get the gun away from them," she says, "or it'll start all over again. I'll cover you."

Tansy edges forward. She snatches up the rifle and slings it over shoulder. "Someone look after him."

One of the scavengers scurries forward as Tansy retreats a few paces.

The scavengers are getting tetchy, but none are willing to be the one to start the fight. Ewa moves up under cover, hoping to remain unseen [Dex/Stealth vs. Wis/Perception: 10 vs. 5, success]. She gets to within [1d6x5] 10m of Tansy's position, seemingly unnoticed.

"What do we do now?" asks Tansy, hazarding a look over her shoulder. "You still there?"

"I'm here. Tell them to get on the ground, face down."

"Why should we?" says one of the scavengers. "So you can shoot us more easily? Face it, you might have a gun, but you're outnumbered. And the more you shoot, the more chance somone'll hear and come running."

"Fine," says Tansy, defeated. She takes a deep breath, then tries to sound as stern as she can. "We'll start shooting if you don't listen to me. I'm going to count three. One... two... th--"

Only one of the scavengers beat Ewa and Tansy's initiative]

[Round 1]
One of the scavengers throws a knife at Tansy [10+1+AC6=miss] but it sails clear past her. She responds with a burst from her submachinegun, killing the scavenger. Ewa's rifle barks, and a second scavenger falls bleeding to the street.

The other three scavengers turn tail and run.

"Why does this always happen every time I leave the farm?" says Tansy, still in shock.

"We should hurry," says Ewa. They probably won't be back... but if they do, it'll be with reinforcements." 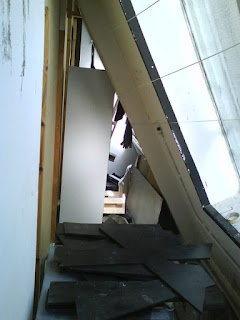 They rush into the building where Shelly is trapped beneath a collapsed girder. Tansy checks desperately to see if he is still alive.

The huge, gaunt, mutated bull snorts and stamps when it hears strange footsteps coming up behind it. He tries to rise but his front hooves just struggle and slip on the slick floor. He looks back over his shoulder, and Ewa shudders when she sees the sharp horns and bared, awful fangs. But the animal's face softens immediately when it sees Tansy. She pats his head and whispers comforting words before turning back to Ewa.

"I think his leg might not actually be broken," she says hopefully, "but he still can't move."

"I've got to be able to rig something out of all this junk," muses Ewa.

[Ewa needs to roll 8+ on Strength/Postech to improvise a lever to shift the beams: 11+1=success]

Ewa finds some serviceable carbon-steel pipe and a pile of solid furniture enough to make a lever. She can only raise the fallen beam about half a metre, but it's enough for the redhorn to slip out, and stand shakily on all four feet.

Ewa offers a stim patch to Tansy. "Here. This should help with the pain. But you should probably be the one that applies it."

"OK..." says Ewa. She fully expects a disaster when she slaps the patch on, but the redhorn's tail merely twitches a few times. Then the beast turns to face her with its big, soulful eyes and snorts quietly in what Ewa is sure is meant to be gratitude.

But the touching scene is cut suddenly short. "What's that noise outside?" says Ewa, picking up the combat rifle. "It sounds like voices."

She pads over to the entrance and peers to into the street, where a number of distorted, twisted, once-human savages crawl about on all four limbs, shouting amongst themselves in their horrible voices.
"Skewmen!" whispers Ewa. "Is there a way out the back of here?"

"I think so," says Tansy, hopefully. 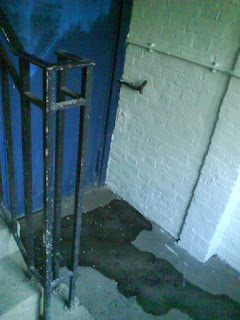 The three make their way out to the back of the building slowly. As they are about to leave, they hear gunfire round the other side.

"They went for reinforcements!" says Ewa.

"And they're fighting the skewmen instead of us!" says Tansy.

They break into a dead run down the back street, and the sounds of gunfire get further and further away. They turn up several side streets to put as much distance and rubble between them and the other parties as they can. By the time they can run no more, they have found a narrow, partly obstructed alley (just big enough for a redhorn to pass) in which to hide. Listen as they might, they can hear nothing above the blood rushing in their ears.